Everyone is talking about the EU Referendum. As the Leave Campaign were gaining momentum, one man in particular wanted to do what he could to Remain in the EU. He set up the website that has gone viral – Call Your Nan.  This man was Liam Brennan. Liam and I used to work together a few years ago and I wanted to find out more about the site @LCBrennan put together in just a few hours.

“Liam, thank you for taking part in the interview.  Your site – call your nan has gone viral.  You were featured in the Huffington post, Metro and Guardian too, interviewed on the radio and even some celebs have tweeted the site.

From today it looks like you have just over 30,000 visits and it is the last day to vote. 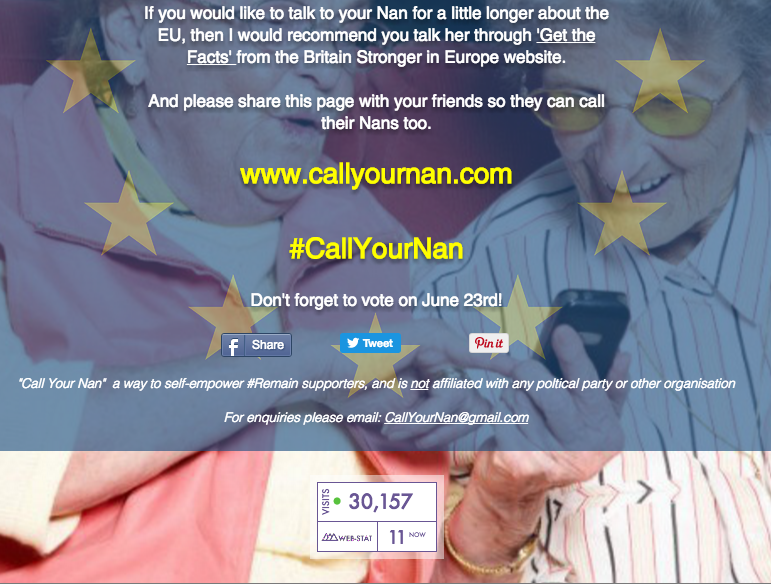 This is an impressive number of visits so far in just a few days. I have a few questions I wanted to ask you about this site:

“I noticed that the Leave campaign had been growing in support over the last few weeks, largely via the tabloid press focusing on the idea of ‘Losing Britishness’ – seemingly uncontrolled immigration and a feeling of control being lost to faceless bureaucrats in Brussels.

As a Remain supporter, I’ve been very frustrated by the poor job done by the Remain camp. They have relied heavily on cultural and business leaders to do their work for them, and smothering voters with facts and figures rather than also relying on the very powerful) emotional pull).

I had recently seen some YouGov research showing a clear divide between remain and leave supporters. The barrier is clearly drawn between age and socio demographic rather than a typical ‘left and right’ divide.

I thought a good strategy would be to use the passionate <35 audience (who are posting about the EU referendum in their social feeds, but to people who already think in the same way) and get them to try to sway the older segment, who still read traditional media and aren’t exposed to a variety of sources and arguments beyond immigration and identity.

So I decided to build CallYourNan.com – playing on the idea that your Nan is very likely to vote leave, but she may not be aware of the aspects of the EU that benefit the younger generation who will have to live with the consequences.

2) Did you really build the site in one night – last Thursday?

Yes – had the idea after talking to some other friends in the industry, then spent the night coding the site, buying the domain etc. All up it probably cost me about £50 or so.
I spent some time over the next few days checking some of the copy and altering based on feedback from users and those on social media.

I had to redesign the mobile site a little over the weekend – there was much more traffic coming from mobile than I expected and the site had been designed desktop first and didn’t function as well as on mobile. I’ve been telling clients this for years – a head slap moment for me!

3) Where did you collect all the information from ?

Is it from the http://www.strongerin.co.uk/get_the_facts  referenced on your site?.

I got it from a few different sources. Stronger In was a great resource, but the BBC Reality Check is the best non-biased source I’ve found. Very clear explanations of the key arguments as well as rebuking certain false claims put out by both sides.

4) How did you choose what info to put in your site as Strongerin has a lot of details.

The older age group tends to read more tabloid media (with heavy tabloid influence), and they’ve been very focused on the immigration and identity angle. It’s very difficult to argue those points as by the very nature of being in the EU, we will have increased migration and some loss of control.

So instead I focused on the areas the tabloid press aren’t really focusing on and showing the benefit of those to the younger generation. The six issues I chose were the easiest to distil into strong, clear arguments that would be relevant to young people.

4) Did you do any marketing for your site?

None bar sharing on social media. There are some strict laws around campaigning which I was conscious not to breach. I had intended to put a small amount of money behind this, but traffic coming from organic sharing was far greater than spending a small amount of money for some hits.
The grass roots nature of the campaign also may have been negated had I put money behind it. People were far more willing to get behind it as it came from the heart and not a lobbying block.

5) Why do you think the site attracted so much publicity (there is already a lot of info out there).

There are two main reasons why I think CallYourNan.com has made an impact

6) Where are all your visitors coming from?

After finding this out, I went back to fiddle with the meta data to make it clearer what the site was about to to drive more traffic when someone organically shares the link. That really kept the traffic stready after the first 48 hours.
Interestingly, Twitter and some of the news articles drove very little traffic, but they have been able to create a lot of buzz to help the campaign get picked up by others with social influencers and the wider press.

7) What do you think will be the outcome of the referendum?

I think it will be quite tight, but I expect Remain will win. The Leave team really came unstuck during the last week of campaigning when pressed for better arguments beyond sovereignty.

However, I don’t this issue will go away any time soon. A very clear divide is emerging between young and old as well as socio economic groups. I hope CallYourNan.com help bridge that divide a little.

8) And where did you get those photos from (The two nans  and the woman  are they istock photos)  ?

Royalty free imagery. Some people have taken other images and placed the URL on them, which is handy (but maybe not so legal!)”.

“Thank you for taking the time to be interviewed on SEO Jo Blogs. I am anxious about the outcome myself.  Leaving the EU will have a big impact on me and my family.

If you would like to meet Liam and know what he looks like, he appears before you now, eating his Danish pastry and having his cup of coffee” 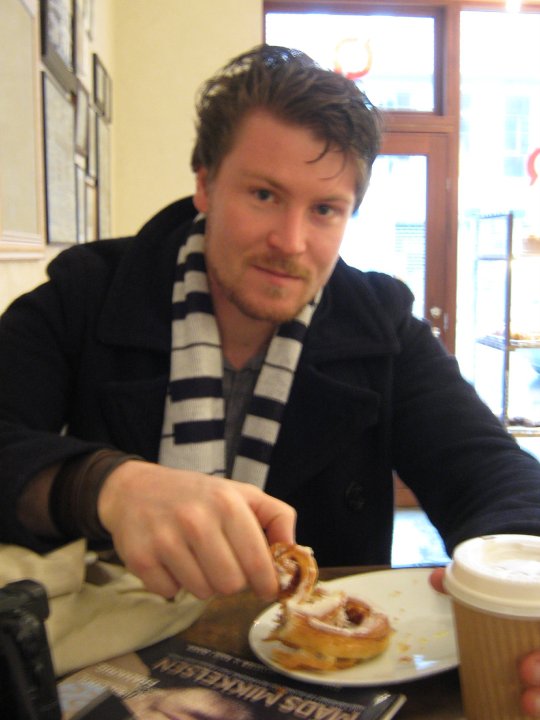